COVID-19 does not discriminate when it comes to music. Every discernible live music venue’s been shut down, artists with tours planned have had to cancel them, and even going down to your local music venue to catch a DJ set or an open mic is no longer possible.

Though financially, many – if not all – musicians have or are taking a hit, the spirit of music has moved forward with love, hope, and community.

Artists from every genre have gone to live streaming to perform, connect, and brand. Coldplay’s Chris Martin, John Legend, Pink, Keith Urban, and Diplo are just a few of the names of who have done this.

How Did This Happen?

No one expected coronavirus, or COVID-19, to progress to the point it has. For musicians and creators, the shutdown has meant large gatherings are off-limits for the foreseeable future.

Plans are changing day to day but as of right now, it doesn’t seem likely live concerts in any venue will be allowed until the late summer or early fall at the earliest. Fortunately, with where social media and live streaming technology has come, hosting quarantine concerts have become the norm.

Everyday people are looking to music to calm anxieties, stave off depression, and keep their spirits up.

Live streaming, music streaming services, and social media numbers are all up, in large part because everyone’s home. A captive audience means a big opportunity for musicians from every genre.

Even DJs are finding themselves spinning and mixing online to massive numbers. The biggest event thus far around the DJ scene was probably Beatport hosting a 24-hour live stream with 33 DJs working from their living rooms and private venues. Once concluded, the Beatport live stream reached over 8.5 million people across 150 countries.

The most popular spots to share these sort of live stream COVID-19 quarantine concerts is through social media, predominantly on Instagram and Facebook. You also have music performances being given on Zoom, Twitch, and other platforms.

The great thing about music live streams is you can dance anywhere and listen to music anywhere. No matter what, it’s going to make you feel better. It doesn’t have to be in a field, sports stadium, club, or wherever. DJs live streaming in quarantine are a great example. They send out music to homes all over the world, each person having their own little house party disconnected but also connected to everyone else watching.

Why It’s A Smart Move for Any Musician’s Brand

The vast majority of us are at home and with not a whole lot to do. To have the opportunity to participate in concerts from our favourite artists, it’s exciting. As a musician, it also keeps you connected to your fan base. You may even make some new fans. The intimacy of communicating with your fans from a living room setting or your kitchen, it gives something authentic to those that are watching and listening. It’s the best brand-building move an artist can make right now. 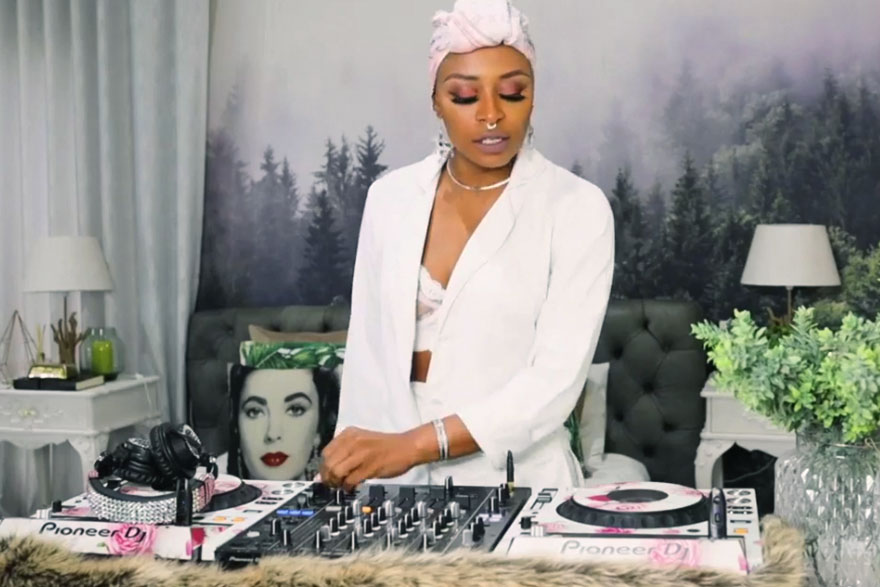 What to Do As A DJ in the COVID-19 Pandemic

You have numerous DJs attracting attention from hosting live streams during the COVID-19 quarantine.

David Guetta hosted a two-hour DJ set charity live stream the third weekend of April on his Facebook, Instagram, YouTube, Twitter, and Twitch channels. This was to raise money for the World Health Organization and several charities.

DJ Padre Guilherme is a priest in Portugal and also a DJ. Throughout the pandemic, he’s been offering live streaming DJ sets to anyone stuck at home.

At a local level, DJs from Vancouver to Montreal, Los Angeles to New York, and London to Tokyo are spinning online to hundreds of thousands of music lovers and people searching for something to connect to.

The Music Industry is Wrecked, While Music is Thriving

Despite all the amazing music being made and shared via live streams, the industry – as in, money being made – has taken a major hit. Music festivals are cancelled, tours are unfathomable for the rest of 2020, and record labels are refusing to put out new albums from artists fearing a lack of commercial potential.

If you’re a musician and your bank account’s taken a hit, the best thing you can do is make music, create, and put it out. You’ve got nothing to lose and everything to gain, especially as an independent artist. DJs are broadcasting to thousands of people. There’s an audience out there, for all kinds of music.

How Do You Monetize Live Streaming in the COVID-19 Lockdown?

Here’s the caveat. Let’s assume live music streaming takes off. This opens up a lot of opportunities for DJs and musicians. How do you monetize live music – the answer’s unclear.

Prior to the coronavirus pandemic, it was estimated live streaming as an industry was going to grow to $70 billion by the end of next year. What this will grow to or be reduced by is unknown. Music certainly has benefited audience-wise from the increased exposure. That said, who is making money – not the DJs nor the musicians. No one’s selling tickets to these events. Advertising or corporate sponsorship isn’t involved.

For now, it’s joy spreading joy. That’s fine for now. It’s a time of crisis. We need music. DJing music’s an international language we all speak. That said, there’s going to come a time when platforms are created and money will be made. Whether that money’s in the pockets of the musicians or DJs is another story. Everything gets commercialized… eventually.

There’s no questioning the long-term potential of live streaming music. Lively nightspots will inevitably return. It’s coming. Even after it does, a new window in live music has been opened and it’s not shutting any time soon. That’s a very good thing, for DJs and audiences both.