Choosing the best DAW in 2018 could revolve around any number of variables. For any producer or musician, when it comes to building your own personal home studio setup, this is oftentimes the decision that plays one of the biggest roles in defining how you work it.

Choosing the right DAW for your studio might come down to a preference in software. In many cases, we oftentimes come to our preferences for DAWs after trying a few to see what works best. In other cases, we might be pushed towards a specific DAW because of the genre of music we work in or because it’s what our peers in the genre use.

There are many reasons why we might choose a DAW but the thing that we all have in common is that the workstation we choose does have an immediate impact on the way we write and produce music. After all, your DAW is what you will be looking at every time you begin a songwriting session, any time you’re recording or editing a track, and any time you’re putting down the finishing touches. Thus, you want to make sure you choose something that you can stick with for the long-term.

In most cases, the more you use a DAW, the more features a user can discover. Be it for songwriting, mixing, recording, or all three, one might stand out above the others for you. Though it’s always recommended to try a few before settling down on any one specifically, we hope this guide can provide some insight into what the best DAW is in 2018 for your music. 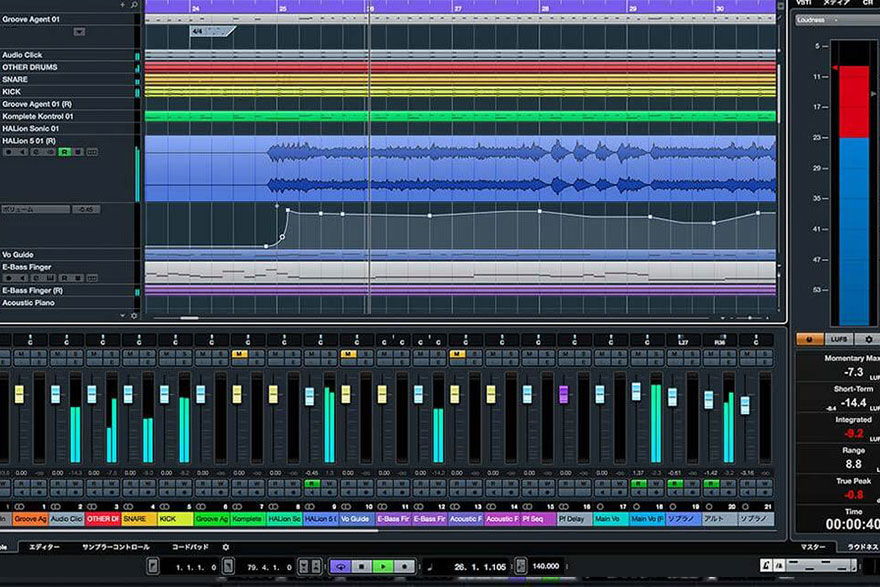 Cubase is a DAW that has been around for a long, long time. Much like Pro Tools, Cubase has been used on some of music’s biggest and most popular productions, and has subsequently been responsible for many innovations in the digital audio industry.

As Cubase has adapted over the years with new developments and new competitors, it has been able to successfully incorporate some of the trendiest and most reliable tools of the trade in its interface.

Today, Cubase continues to be used by producers and musicians seeking a DAW to compose, record, mix, and edit music, producing high quality audio across any genre of music. Also, with Cubase, one can take advantage of its large collection of advanced audio and MIDI tools. Though there may be trendier DAWs in 2018, Cubase continues to be one of the best and is still a strong recommendation. 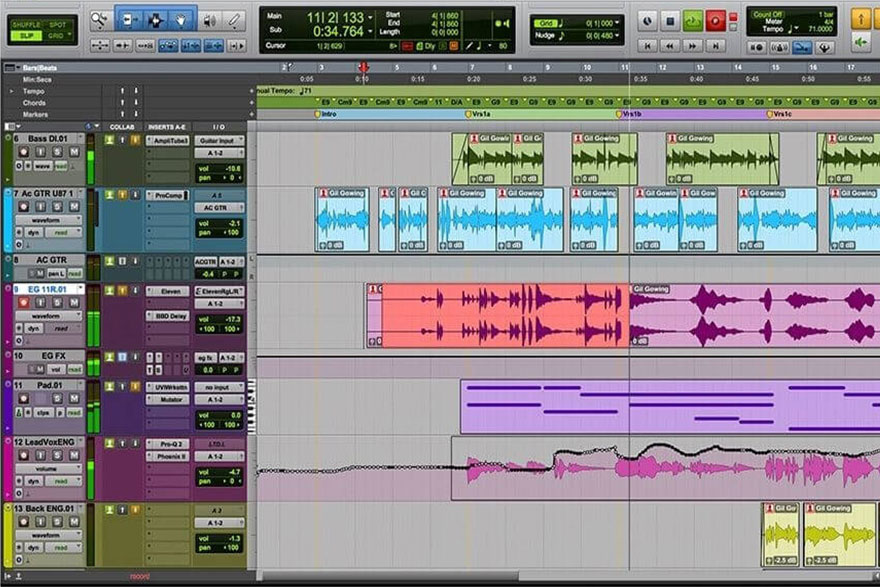 After multiple decades of use on some of music’s biggest hits, Pro Tools has become easily the most well-known DAW in the world. When it comes to professional mixing and editing, Pro Tools is the highest standard that all other workstations have to meet.

Despite the widespread acclaim Pro Tools has been shown, there are some artists and producers who might not prefer it. For example, though it has a nice collection of stock plugins, it is notorious for not having a healthy multiband compressor. Also, some producers have found more functionality and intuitiveness on other DAWs such as Logic, Ableton, and others.

Though expensive, Pro Tools provides a user with the same tools that have been maximized to make music of all genres as well as film soundtracks, TV themes, and more. Recording, editing, and mixing come easy on Pro Tools, leaving it a strong consideration for any artist or producer looking to go as professional as their budget will allow. 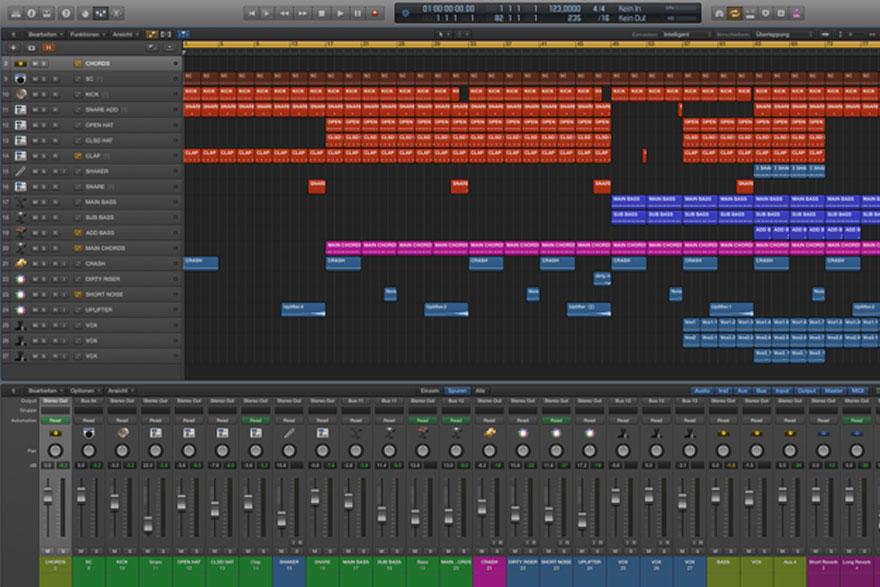 Logic Pro is an amazing DAW for both composing and producing music. If you own an Apple computer, Logic Pro is arguably the most complete Mac-specific recording software you can own and one of the longest serving DAWs in the market. Though its roots lie in MIDI, Logic Pro has progressed to the point where it’s considered one of the best valued DAW packages available.

If you have been toying with GarageBand, Logic Pro is a much more advanced version of this style of DAW. There are numerous major rock and pop artists who’ve flocked to Logic Pro for recording and mixing, producing some of the biggest selling songs in these genres – Lady Gaga, The Killers, and many more are on this list.

There are many benefits that come with buying Logic Pro, including hundreds of stock plugins that make for one of the best stock collection from any DAW. For the musician that is fixated on using Mac and may not have any ideas on what DAW to choose, Logic Pro is a versatile choice that will get you everything you need to write, record, edit, and mix irrespective of music genre. 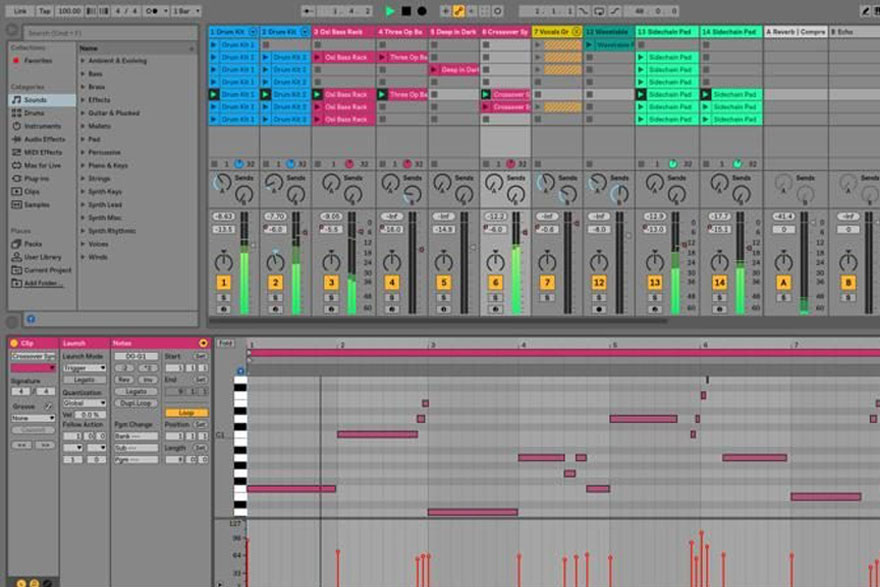 Ableton Live is well known in electronic music production and dance music production. DJs and EDM artists all over the world use Ableton Live to integrate non-live elements into their live sets. Throughout recent years, Ableton has worked wonders on some of EDM’s biggest festivals and live shows, delivering musical ideas that could in no way be reproduced every night live.

For electronic music production, including those artists and producers who are regularly involved with live performance, Ableton can take even one’s wildest studio ideas and translate them onto the stage rather well. As a DAW, this makes Ableton Live highly recommended for this use. Deliver loop-based improvisation, on-the-go arrangements and re-arrangements, and spontaneous musical ideas in a live setting with this DAW with ease.

That said, where Ableton Live falls short is that it does not have some of the more advanced editing and mixing features that one will find on other DAWs in this list. In terms of EDM and dance music live performance, there might be nothing better than Ableton however when it comes to writing, mixing, editing, and producing a finished track, Ableton might not be able to deliver the same versatility as other DAWs. 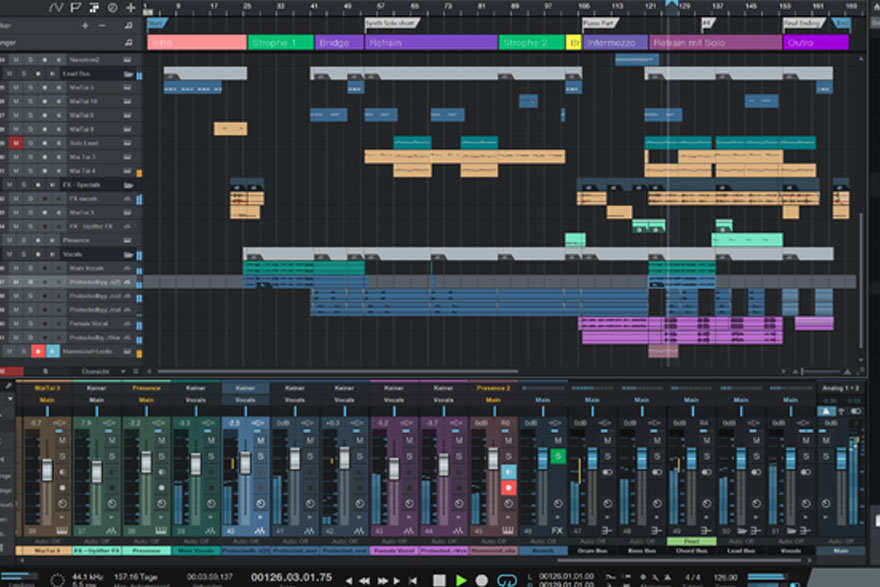 Studio One is a DAW that has been growing in reputation these last few years and is a relatively new addition to this list. Though it’s only roughly eight years old, the Studio One DAW has become one of the most widely used today in large part because of its affordability.

The Studio One DAW is set up like a few of the other more popular DAWs on this list and comes with a lot more to it than one might expected from a less expensive alternative. After one has gotten used to its flow-oriented drag-and-drop interface, using Studio One is easy.

Studio One is produced by PreSonus, a company largely known for their hardware mixing consoles, preamps, and audio interfaces. Though Studio One used to be a basic DAW addition provided with some of these products, it advanced rather quickly among newer producers. For producers seeking a good, well-rounded DAW, Studio One is just as professional as Pro Tools or anything else on this list. 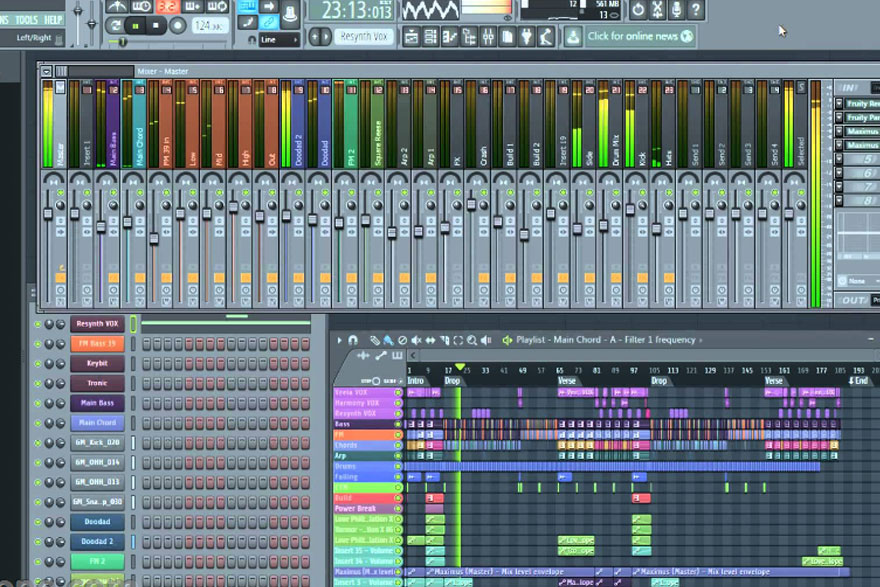 Fruity Loops, otherwise known as FL Studio, is extremely popular among software music production enthusiasts working from a budget. As an affordable DAW in 2018, Fruity Loops is a favourite among newer producers just getting in the game.

Fruity Loops has a number of benefits to it, including being very easy to use and having some amazing songwriting or composition features. That said, the DAW falls short a little bit when it comes to some aspects of working with audio.

Newer versions of Fruity Loops has resolved much of the complaints of the software in earlier iterations. Having been around for nearly two decades, the newest version of FL Studio has everything a music production artist will need to effectively compose, arrange, record, edit, mix, and master professional quality music without difficulty. 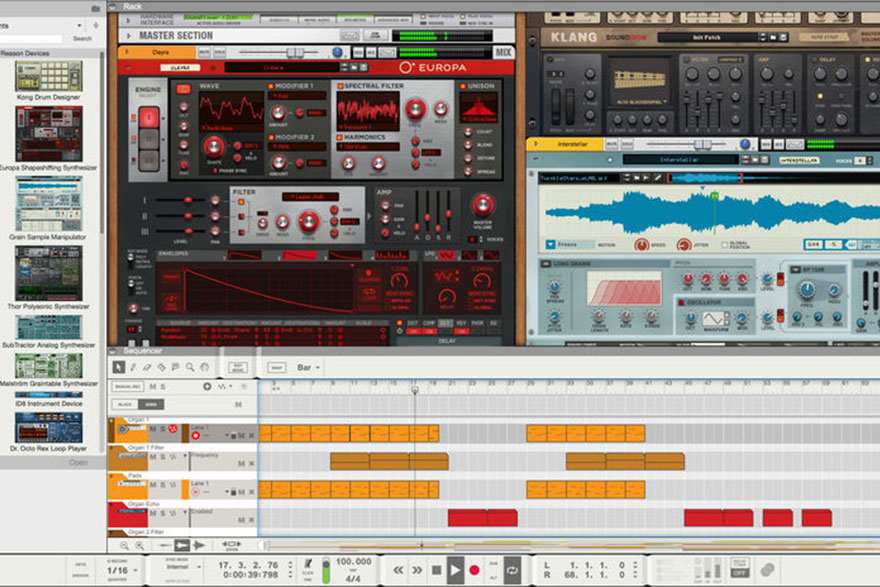 Reason is similar to Ableton Live in some ways as it is commonly used by electronic music producers – particularly those that are looking for a more hardware-driven, analog look. Though its VSTs are powerful and spectacular, its ability to collaborate with external tools also lends itself well to electronic music production and sometimes, live performance.

For users that may see Ableton as a little too advanced, Reason might be an easier place to get started with music production software. Reason still has some of the same functionality and features one will want but some users see it as easier to use.

Create, compose, and mix as you see fit with bundled library content that includes thousands of instrument patches, over 1,000 effects patches, thousands of loops, and enough drum and percussion samples to keep you busy for hours on end. 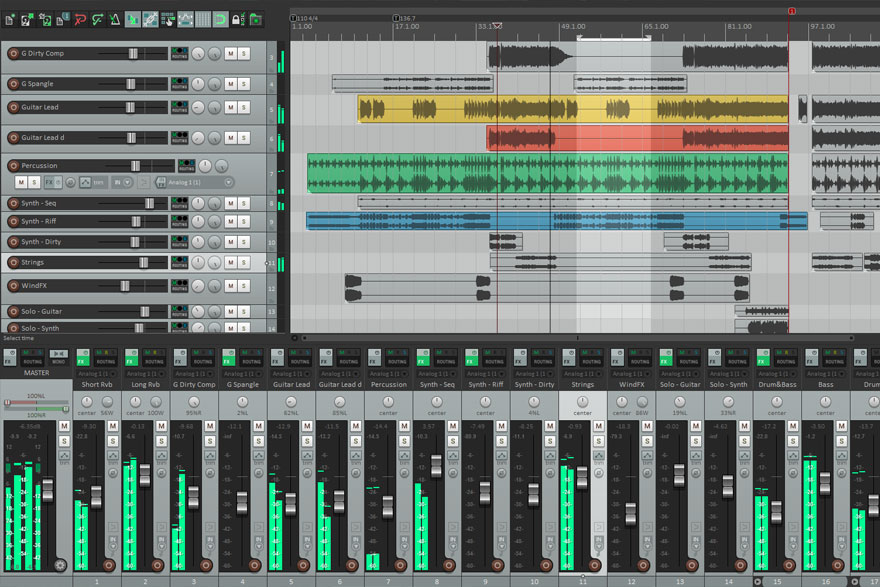 Reaper is an expert-level, affordable digital audio workstation that costs less than $100 for a personal license and which continues to be a personal favourite among countless users. Extremely powerful, customize the layout and functionality to match your workflow.

Reaper is a complete DAW solution for producers, mixers, and artists who may not have much to invest in anything above its price point. Though it does have its limitations, including stock plugins that are somewhat basic, the DAW still offers multi-track audio recording and mixing capability than most artists can appreciate.

For many of the world’s most famous artists and producers, Reaper is one of the first DAWs they work on. Best for recording, editing, and mixing, if you’re doing less live recording and more in-software editing, Reaper is a bargain DAW in 2018 that is hard to beat.

In no particular order, Cubase Pro, Pro Tools, Logic Pro, Ableton Live, Studio One, Fruity Loops, Reason, and Reaper are the top DAWs of 2018. Any of these are great partners in taking your music production to the next level. The more versatile the DAW is and the more in-tune a DAW is with the style of music you are producing, the more comfortable you will be in creating and composing, recording, mixing, editing, and ultimately, arriving at the best music you can make.

Throughout a musician or producer’s development, they may choose to use multiple DAWs. This is not entirely uncommon, especially the more one mixes multiple genres into their arsenal. As technology is developing, we look forward to seeing what the best DAWs of 2019 are and what new developments lie around the corner. Be sure to experiment and find the DAW that best represents the way you record, arrange, and mix. After all, what you choose will influence and inform the creative decisions you make!