If you ask the question: “is censorship still relevant?” the answers you’ll get might surprise you. Anyone born after Eminem’s Marshall Mathers LP (essentially anyone under 25), might tell you that it isn’t. Express yourself. If the music is genuine and strikes a chord, it will find its audience regardless. Ask anyone older, however, and common opinion might swing the other way.

Censorship in the Past

In 2000 (the year MMLP was released, the variations of “The Real Slim Shady” and “Stan” were looped on the bus ride to and back from elementary school) music was a primarily physical good and the choice to censor oneself had equally physical consequences. Just saying the N-word meant having to potentially release two different versions of the same song, and being suggestive in the way that Eminem was at the time usually meant having to press a separate “clean” version of an entire album. It had physical and financial consequences that had to be weighed. A&R might be on the phone for days. Constantly measuring whether the notoriety of an explicit tag could make up for all the ears it didn’t reach precisely because of its uncensored status. Brick and mortar music stores had a separate order sheet for clean vs explicit copies of a record, and a shortage of either could signify missed opportunities. In the simplest terms, making a song that needed censorship was expensive, and might not always be a choice that every artist could make on the same scale as a certain Marshall Mathers.

This is to say nothing of network technologies like radio and television, which were at the fore of music discovery, and relegated these decisions to tastemakers such as DJs and radio hosts, who were then responsible for the rest. They decided which song preceded and followed yours, whether your song was played during rush hour or in the morning, and whether your song received any spins at all. Human discretion reigned supreme, and was the sharpest margin against which artists who were deemed “explicit” were judged by. Moreover, the highly localized infrastructure of radio often meant that regional (or corporate) tastes often decided which kinds of music could break, and which ones couldn’t. Folk wisdom would suppose that censorship in eras past were rooted in these kinds dialogues; about what kinds of music/artists were either too politically charged, too suggestive, or too crude. Thus, adhering to popular consensus on socio-political issues was the surest way to stay away from muddy business. Statements like “Don’t talk about same sex love on a radio single” or “avoid talking about politics”, or “don’t be too obscene or edgy” (and probably many more) were common knowledge. And as listeners, whether by incident or by design, this highly polished, (mostly) innocuous state of affairs manifested in the expectation that published music had a preeminently social and cultural curriculum against which it was graded by. Naturally, the resistance to this fact was to do exactly all those things; to be political (a la The Beatles refusing to perform for segregated crowds) be raw and uncut (like uncensored social and political discontent of N.W.A) and go a little crazy and a do little bit of all of the above (like the sarcastic, heretical, and sometimes brilliant persona of Eminem at his peak chaotic neutral). 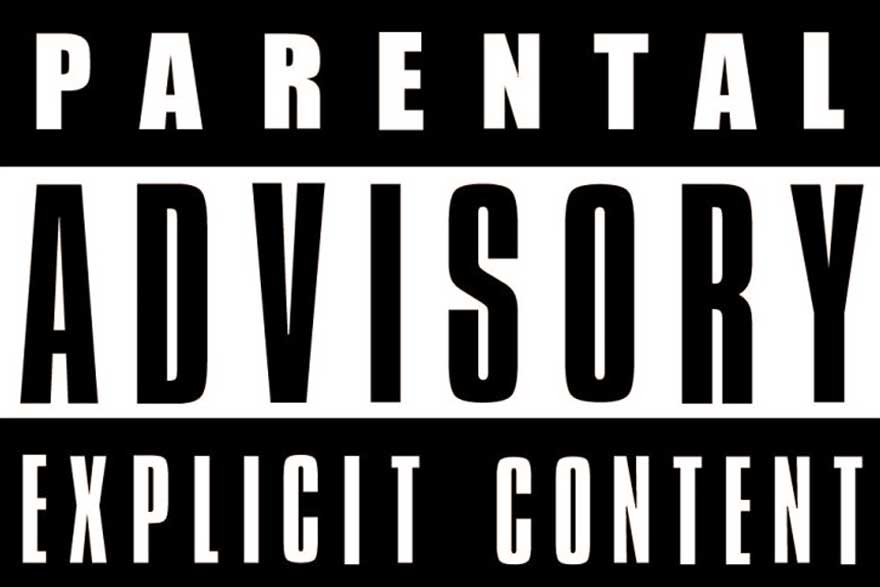 Few people from that era could predict that by MMLP’s 20th birthday, that music distribution would shift away from physical product entirely (save for vinyl and merchandise) and go digital. Fewer still could predict what kinds of consequences this digital shift might have on censorship. Making a “clean” version of a song can be now as easy as downloading Audacity and inserting a well timed moment of silence. An entire album can be censored for (almost) free and of far smaller consequence to the artist themselves. So, again, the question becomes “why bother?”. Modern rollouts like Kendrick’s Pimp A Butterfly, Taylor Swift’s Evermore, and Drake’s If Your Reading This Its Too Late (to name a few) have made the idea of overnight ubiquity unremarkable, and answered that old axioms of censorship (of lyrical/political content, artistic direction, or personal expression, respectively) are no longer the difference.

While such a conclusion can seem heartening, the complexity of censorship in the modern era is far more sophisticated than that. The ubiquity of music streaming has greatly reduced the need for the human middleman of yore. Advances in programming and artificial intelligence enable software to play disk jokey, curator, and content manager all at once. Spotify, for example, stated that they collect several terabytes of data from their users every day. Information on everything from how someone sequences a playlist, to the most common tempo across a person’s library, to the amount of seconds someone spends on a given song before either tapping “like”, tapping away, or deciding to let the song finish, is information fed back into an algorithm. This algorithm then spits out guesses at what songs should come next, and creates the personalized experiences that so many people return to services like Spotify for.

What does this mean?

The most relevant gatekeeper, then, becomes software. And software has different priorities than people do. North American Copyright law, for example, is king. Any audio clip with recognizable sample of protected material can be automatically removed., without judge or jury, meaning that digital creativity predicated on transformative use(Hip Hop/Pop/EDM/Electronica that isn’t acoustically recorded) is held in place by an algorithmic straight jacket that constrains melodic and rhythmic innovations from occurring in real time. Since many of these copyright laws are enforced by software, artificial intelligence now carries the sword of Damocles, unsheathed, and is responsible for defining the boundaries of artistic speech. The biggest impediment to releasing a song is sample clearance. Unlike the past, where being censored meant having to rerelease a song, a song with an uncleared sample can be vanished instantly by the automata that police the digital platforms of the present, as well as the digital platforms of the future. Simultaneously, the chief concern for the modern artist of the day isn’t a pressure to straddle the socio-cultural milieu, its the pressure to stay profitable, and this shift is having interesting repercussions on music.

The weight of a swearword in 00’ meant maybe having to fight stations to get your songs through, or hoping demand would be big enough to make it not matter, or trusting that bootlegs could distribute your song anyway. An uncleared sample, or even extensive use of sampling, was not only possible but the norm. Kanye West’s ‘chipmunk’ soul aesthetic wouldn’t have been possible if copyright laws(and its speed of enforcement) were the same as they are today, nor might his music have reached such a considerable audience had these copyright laws been enforced by algorithms rather than people. Nowadays, Eminem’s MMLP seems ordinary, banal even, when compared to the eye-brow raising antics of internet savvy artists who learned, perhaps thanks to records like MMLP, how to turn notoriety into success. In contrast, however, weariness of sampling, interpolation, and interpretative use (due to the power of copyright) is now the most prescient concern in the minds of both listeners and artists at the publishing stage.

Looking Towards the Future

Its clear that the internet has transformed publishing in the modern era. It has also shifted prestige away from recording industry era network technologies like radio and television, and placed that prestige in the hands of transnational music and video streaming companies that, in turn, are shifting the focus point of contemporary musical creativity and consumption. The internet has granted artists and audiences alike with unprecedented freedom in finding art that resonates, yet the internet continues to have a persistent, if only less visible, impact on the music that is allowed to reach our ears anyway. One must wonder, if MMLP was released 2021, which part of the record would have been the biggest candidate for censorship; its lyricism or its samples?